A materials resistance to heat flow is called its Resistance-value or better known as R-value.

Having high R-value insulation installed in the cavities of your home slows the flow of heat through walls, floors and ceilings.

The higher the R-value, the more effective the insulation. For example, heat flows through an R-8 wall twice as fast as through an R-16 wall.

Different types of insulation have different R-values per inch, and have varying construction and insulation applications. Fiberglass insulation usually has an R-value of approximately 3 per inch. Cellulose insulation is made from treated, recycled paper and is generally blown into finished walls, attic floors and other hard-to-reach enclosed cavities. Dense packed cellulose has an R-value of 3.8 per inch.

Can I depend on R-Values when comparing Insulations?

R-values tell only part of the story. Unfortunately, they don't tell you how well the insulation will perform in your home. R-value is a laboratory measurement and does not effectively measure all 3 methods of heat transfer that occur in your home: convection, conduction, and radiation.

"...conduction, radiation, and convection are the primary mechanisms [ of heat transfer ]."
-U.S. Department of Energy 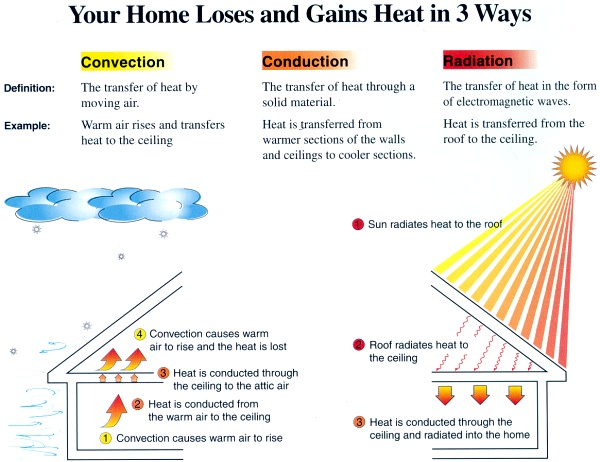 Beyond R-Value: The truth about insulation
performance in the real world of buildings


When the "Energy Crisis" of the 1970s sent home heating and cooling costs soaring, demand for building insulation rose right along with the prices of oil, gas, and electricity.

As often (unfortunately) happens when demand for a product increases suddenly and dramatically the promise of fast and easy profits occasionally led to fast and easy sales and marketing practices by some insulation sellers. Eventually the claims and confusion in the insulation market became so extreme the Federal Trade Commission instituted "The R-Value Rule." This regulation placed clear limitations on the claims and statements manufacturers and marketers can make about insulation products and the energy savings they may produce.

The regulation is called "The R-Value Rule," because it is based on a mathematical term known to engineers as "The R-Factor." R-Factor is a measure of the ability of insulation material to resist heat transfer. It's determined by placing carefully prepared test specimens between two plates in a laboratory apparatus and measuring heat flow through the insulation. "R-Value" is the R-Factor of the insulation multiplied by the amount of the material.

If insulation has an R-Factor of 3.8, and there are 3.5 inches of insulation between the warm side and the cool side of the assembly, the R-Value of the insulation in the system is 13.3.

The R-Value Rule is a good regulation that has significantly reduced misrepresentation and outright fraud in the insulation industry. It's one of the most important and successful consumer protection regulations ever enacted by the U.S. Federal Government.

Consumers often assume The R-Value Rule will automatically and unerringly lead them to the insulation product that will produce the greatest energy savings when it's installed in a building. Unfortunately, this isn't the case. In the real world of buildings things are a bit more complicated. In fact, they're a lot more complicated.

R-Value is a very accurate and reliable expression of how insulation materials perform in a laboratory apparatus. But people don't live in laboratories. They live in homes with real walls and ceilings, and in the real world of buildings R-Value is only one factor in the actual performance of insulated building assemblies.

Scientists and engineers refer to building systems that separate the interior of a structure from the ambient environment as the "building thermal envelope." Many factors affect the energy efficiency of the thermal envelope. These include:

R-Value is important, but building scientists know that focusing on R-Value to the exclusion of all other factors can result in disappointment with thermal envelope performance. It's known, for instance, that thermal bridging can reduce the actual energy efficiency of a wall by up to 50 percent. U.S. scientists have proven that convective flows in very light density attic insulation can reduce its performance by more than 40 percent under winter conditions. Canadian researchers have reported a similar effect in walls.

Air leakage and gaps at the interface between framing members and insulation is harder to quantify, but in a letter to >Home Energy> magazine an experienced, prominent thermographic inspector stated:
Of the hundreds of buildings I have inspected with infrared thermography I have yet to see even one fiber glass job that doesn't suffer some reduced thermal performance. Often the degradation is substantial, especially under windy conditions.

In the winter of 1989-90 The University of Colorado School of Architecture and Planning decided to put two insulation materials to the test. CU researchers built two identical test structures. One structure was insulated with R-19 fiber glass batts in the walls and R-30 batts in the ceiling. The walls of the other structure were insulated with cellulose wall spray, and R-30 of loose-fill cellulose was blown in the ceiling.

Although the nominal R-value of the insulation in the walls and ceilings of the structures was essentially identical, their energy performance was very different. Blower door tests showed that cellulose tightened the structure 36 to 38 percent more than fiber glass. The cellulose-insulated structure was seven degrees warmer than the fiber glass structure after a nine-hour overnight heat loss test. Most important, after three weeks of monitoring the cellulose-insulated structure had used 26.4% less energy to heat than the fiber glass structure.

After analyzing the data the CU researchers concluded cellulose performs as much as 38 percent better than fiber glass. "The performance advantage of cellulose in temperate climates appears to be about 26%," they wrote. "This benefit would become more significant in more severe climates."

The Colorado data give scientific support to the long-held belief that "R" for "R" cellulose outperforms other fiber insulation materials -- often by a very large margin.

This real world performance difference does not mean consumers and specifiers should ignore R-Value. R-Value is important to insure that buyers receive all the insulation they contract for. It's also important in comparing prices among vendors proposing to supply the same type of insulation.

R-Value is less useful for comparing two or more different types of insulation. For instance, very expensive high density mineral fiber batts that purport to provide an insulation R-Value of 15 in walls with conventional 2 X 4 framing are available. They achieve this "laboratory R- value" by packing three times more glass into batts the same thickness as the R-11 batts that have been standard for many years. The nominal R-Value of cellulose insulation in the same wall would be approximately R-13.

The Colorado data suggest that to obtain an estimate of the relative real world performance of the two materials, the nominal R-Value of the cellulose insulation should be increased by 26 to 38 percent. On this basis the R-13 cellulose wall insulation would be expected to deliver performance equivalent to R-16.3 fiber glass batts. No such batts are available.

The shortcomings of R-Value as a measure of real world insulation performance are increasingly recognized within the building community. The Building Environment and Thermal Envelope Council of the National Institute of Building Science (BETEC) has received a number of research proposals to develop practical methods for measuring the energy-saving performance of total building thermal envelope systems and the relative performance of different insulation materials.

Until this research is completed buyers and specifiers must remember that "R" for "R" all insulation is not created equal. In the real world of buildings it's necessary to install more "Rs" of fiber glass insulation to achieve the energy-conservation performance of cellulose and other insulation materials less susceptible to air infiltration, internal convection, and installation defect problems than mineral fiber products.

Conclusion:
R-Value is an important aid to consumers when comparing proposals and specifications for different brands or suppliers of the same type of insulation. It is less useful when comparing different insulation materials. R-for-R all insulation is NOT created equal!