Two grown-ups, three girls, two dogs and eight chickens.
A 1935 neo-Tudor in Minneapolis, MN.
A passion for the planet.
Mix.

The MinnePHit House is an undertaking with humble beginnings, much like every home improvement project that starts small and grows over time.

The house. It needs work. 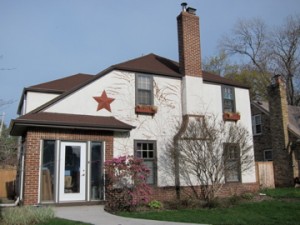 Originally we had planned on adding on to our house, as it was getting to be small for our growing family. With five humans and two large dogs, our little 1400 square foot home needed to grow with us. The sensible thing, we were told, would be to simply move somewhere else. But we've grown to love our neighborhood over the past four years, and could not bear to leave it. So, once we were financially able, we began to look at what it would like to make our home bigger.

Once we started that process, we realized immediately that simply growing the house would be a pointless exercise without addressing the other issues the house has. From an inefficient layout to horrible thermal efficiencies, we had a laundry list of must fix bullet points to address. We knew that we needed an expert to help us solve these problems, but didn't know who that would be. Enter Tim Eian, and the Passive House in the Woods.

The summer of 2010, there was buzz in the local building media about a new home being built in Hudson that was so efficient it had no central heating system. Paul went to go check it out during one of their construction tours, and came away impressed with the Passive House approach: build a superinsulated, tight shell, and suddenly you no longer have to be concerned with exotic, complicated methods for heating and cooling a house. Many 'green' approaches to construction focus on active, expensive technologies, like geothermal ground loops, solar photovoltaics, and solar thermal. These systems are fantastic in their own right, but will ultimately break or become obsolete. Insulation, on the other hand, is forever (well, forever by human standards). 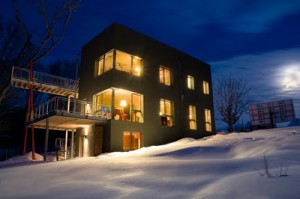 We spoke to Tim that winter to see if the Passive House approach could be used to make our home more efficient. The answer was yes, and we began planning an addition with a deep energy retrofit, which is a whole house efficiency makeover.

Over the course of the winter and spring, we began to make deeper and deeper adjustments to the design to accommodate more efficiency. We started to talk about using German windows, an advanced heat recovery ventilator and wrapping the house with a thick layer of insulation. As we had these conversations, Tim's team entered our changes into the PHPP, a sophisticated energy modeling spreadsheet created by the PassivHaus Institut. Energy modeling is a great way to determine whether you're making choices that benefit the overall goal of efficiency while staying cost effective. In early May we had a preliminary design, and through the PHPP we found that we had an EnerPHit pilot home on our hands.

Now things are getting exciting. Certifying a retrofit to the EnerPHit standard has never been done in the United States, and we're eager to show that it can be done. That's not to say that no renovation has likely met the standard there have been many deep retrofits in the US, especially in the Northeast. But what makes the Passivhaus approach so appealing is that it's a consistent and predictable way to build a high performance home. Instead of throwing a mixed bag of techniques at an old home and hope for the best, we're out to prove that you can plan for high performance and expect to achieve it.