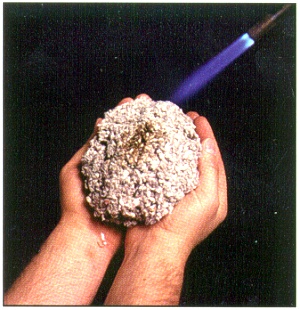 Insulation is an integral part of your home. Depending on the insulation you choose, there may be additional benefits (or dangers) that you may not have considered. 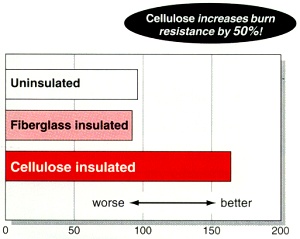 Cellulose Exceeds Tough Fire Standards
Cellulose insulation is the only building material in your home that is commonly treated with fire retardants. Applegate Insulation takes this one step further with a unique, two-stage process that injects dry and liquid fire retardants to penetrate the fibers. The result is exceptional insulation that meets or exceeds required fire safety standards and helps protect you and your family.

Cellulose insulation actually helps make homes safer by providing up to 50% better fire resistance than fiberglass. In practical terms, this means that occupants have more time to reach safety in case of fire. Unlike fiberglass, it greatly restricts the amount of oxygen available to support combustion. 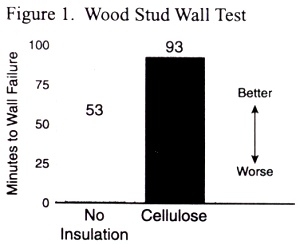 The results are shown in figure 1 (results above). The cellulose insulated wall section increased the fire resistance of the wall assembly by 77%!

Multiple Wall Configuration Fire Tests
The National Fire Laboratory of the National Research Council of Canada, one of the premier building material fire testing facilities in the world, conducted fire resistance tests on wood and steel framed wall assemblies. The tests were performed on uninsulated, fiberglass, and cellulose insulated wall assemblies (results below). The cellulose insulation consistently and significantly increased the fire resistance of the walls - by up to 78%! 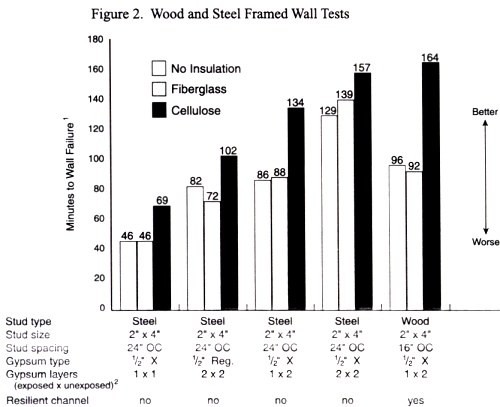 Cellulose is the safest and best insulation commonly used in light construction. This is a problem for those selling insulation products that are not as safe and are much less effective. Somehow, they must convince buyers to accept inferior performance. Some sellers of inferior insulation try to do this by frightening buyers.

Maybe you have heard stories about insulation and fire safety. They all have the same theme: "Our material is 'safe insulation', but their product burns and is the cause of many fires." You may have assumed this is information from an authoritative source.

It isn't. These stories come from the glass industry, a small group of companies selling insulation products that can't compete with cellulose in performance or safety. Here's the truth about insulation and fires.

Insulation Fires
Based on the negative marketing activities of some insulation producers you might conclude that cellulose insulation is one of the leading causes of fires in the U.S. and Canada. This is the first big distortion. "Insulation fires" account for less than one half of one percent of all fires. That is, out of every 200 fires, insulation of any type may have something to do with the start of one of them.

The actual figures may be much lower. In Florida in 1990 "insulation fires" amounted to three-tenths of one percent of fires. That's less than one fire out of 300.

What's burning?
The most authoritative and comprehensive study of "insulation fires" was conducted in California after allegedly non-conforming cellulose insulation was found in several hundred homes that were insulated under a community weatherization program. This caused concern, because about 2.5 million California homes had been insulated - most of them with cellulose - under weatherization programs.

Interestingly, the number of residential fires in California decreased significantly during the period when cellulose insulation was being installed in millions of California homes. Still, California utilities, the state fire marshal, and the California Bureau of Home Furnishings wanted to investigate the fire risk of insulation.

Since the key area of concern was attics, the California Task Force used the state fire marshal's computer data base of fire incident reports to isolate fires that started in attics. It further refined this by having the computer identify residential attic fires in which insulation was the first material to burn. The computer found about 160 fires that fit this profile in the 11-year period from 1974 through 1984. This is 0.009% - nine-thousandths of one percent - of all fires. That's one fire out of every 10,000.

This figure raises important questions, because "insulation fires" apparently represent about one half of one percent of all fires - 50 fires in 10,000 - in California and throughout the nation. If only one fire in 10,000 starts in attic insulation, where do the other 49 "insulation fires" start?

The only other location where a significant number of insulation fires can start is walls. Cellulose is often found in attics - especially in California - but, until recently, it was seldom installed in walls. Kraft paper-faced glass batt insulation is widely used in walls.

It would appear that for every "insulation fire" that starts in the area where cellulose is commonly used, 49 "insulation fires" start in areas where paper-faced glass batts are usually found.

A death in Alabama; fires in Canada
The only fatality that has been unquestionably directly linked with an "insulation fire" occurred in Dothan, Alabama, late in the 1970s. A man working in an attic was trapped when insulation caught fire and the flames spread rapidly through the entire attic area. The insulation was kraft paper-faced glass batts.

In Canada similar, but non-fatal, fire incidents resulted in the withdrawal of paper-faced batt insulation from the market. Today such batts, which are among the most commonly-used forms of insulation in the U.S., are no longer sold in Canada.

Paper-faced batts are not fire retardant and they are not covered by the same stringent federal flammability standards that apply to cellulose insulation. Cellulose insulation, whether installed in walls or ceilings, is required by federal law to meet a surface burning standard most authorities regard as equivalent to a Class I flame spread rating.

To qualify as a Class I material, insulation must have a flame spread of 25 or lower as determined by ASTM Standard E-84. Most cellulose products have flame spread ratings well under 25. A famous testing laboratory has measured the flame spread of paper-faced glass batts at approximately 2,000.

Assuring an abundant oxygen supply
Frightening as the flame spread characteristics of paper-faced batts may be, the principal hazard of glass fiber insulation in a fire situation isn't the fuel the facing adds to the fire. It's the unrestricted supply of oxygen fiber glass in all forms assures will be available to burning framing members.

Fiber glass has a wide open structure that is all but transparent to fire and air, and it quickly softens and melts as the fire intensifies. When fire occurs in or spreads into a wall insulated with fiber glass the insulation provides little resistance to the flames and the oxygen that supports them. Wall cavities become convection chambers that literally pump oxygen to the fire. Anyone who has ever built a fire in a fireplace has seen this principle in action.

When walls are insulated with cellulose the scenario is quite different. Cellulose is dense material that is relatively impervious to flames and gases. Because of this, and the fire retardance of the material, fire does not spread as readily into cellulose-insulated walls or ceilings. Walls insulated with cellulose don't readily become draft chambers that deliver oxygen to burning framing members. Cellulose greatly restricts the amount of oxygen available to support combustion in insulated assemblies; fiber glass assures an abundant oxygen supply.

In less then two hours the fiber glass structure burned to the ground. After three hours all four walls of the cellulose structure were standing, and the fire had burned out. When the walls were opened there was surprising little damage to the framing lumber.

Cellulose and rock wool, which is also a dense material that doesn't soften or melt at temperatures that occur in light construction fires, were approximately equal -- and very good -- in terms of performance under actual fire conditions. Fiber glass was a distant and rather poor third.

What's the real issue?
In a home insulated to Model Energy Code standards with cellulose, insulation represents only 5% to 7% by weight of the wood-based materials. Cellulose is always fire retardant. The other 93% to 95% are wood products that are seldom fire retardant. Why the focus on the 5% to 7% that is fire retardant?

Fire statistics, demonstration burns, and scientific research indicate to the extent that any insulation represents a fire hazard, fiber glass performs worst under actual fire conditions. Why is cellulose so often portrayed as a "fire hazard"?

It's simple. Cellulose outperforms fiber glass as insulation material by such a wide margin -- 26 to 38 percent in a study by Colorado University -- glass insulation can only be sold by creating fear of the superior alternative