Heat loss or gain can occur through an element of the building envelope (wall, floor, or roof/ceiling) by three primary mechanisms:


R-Value, the traditional measure of an insulation's effectiveness, measures only one of these six mechanisms.

Conduction is the transfer of heat within an object or between two objects in contact. For heat to conduct from one object to another, they must be in contact: break the contact and conduction ends. Conventional R-value tests measure conduction only.

Example: A metal pipe penetrating a wall will conduct heat through the wall and bypass the insulation system (this is often call "thermal bridging.")

Within a stud wall cavity, "convective loops" will occur when the exterior and interior temperatures are different. For example, if the interior is warm and the exterior cold, air within the cavity in contact with the exterior wall will cool, becoming denser, and flow downward. Conversely, air in contact with the interior wall will warm, becoming less dense, and rise. Air rising and falling within the wall cavity forms a "loop" which transfers heat from the warm wall to the cold wall. The result is increased heat loss/gain. By stopping the air movement, convective heat loss will cease. 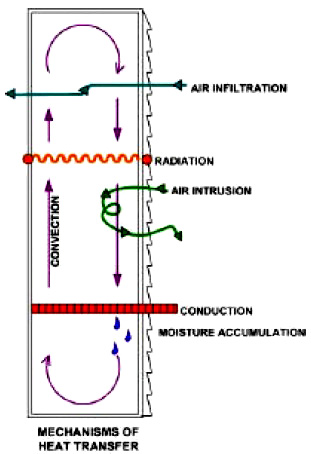 Air infiltration, in essence, bypasses insulation. It transfers heat by the gross flow of air between the exterior and the interior. The underlying force behind air infiltration is the air pressure difference between the exterior and the interior. Air pressure differences can be caused by wind or stack effect.

Air infiltration can be measured using the "Blower Door Test": ASTM E 779 Standard Test Method for Determining Air Leakage Rate by Fan Pressurization. A fan is installed in an exterior door of the house to be tested (and all the other doors, windows, etc. are closed or sealed). The fan speed is adjusted to create a calibrated pressure differential between the outside air and the inside air. The air flow through the fan needed to maintain this pressure difference is measured and used to determine the air leakage rate.